Twingo, also calls “The car that didn’t exist”, is celebrating its 20th anniversary this year. At the time of its launch, the model took the world by storm thanks to its bold design, innovative concept and playful demeanour, and ultimately racked up almost 2.5 million sales. Today the first generation of Renault Twingo becomes an iconic as the Citroën 2cv. In 1989, Renault asked project director Yves Dubreil to come up with a small car that was compact, practical, economical and comfortable – but not a direct rival to its big sister, Clio. Twingo’s conception was dictated by the ‘design to cost’ philosophy and the team’s mission was to propose a compact car, with pioneering, attractive styling at a reasonable price. To achieve that, the only solution was to take a completely different approach with the aim of making life easier... Strip out the superfluous and replace it with unique innovations such as the sliding rear seat. Unlike the diverse model ranges marketed many of its competitors, Twingo was unique inasmuch as it was available in a single version, with just one 1.2-litre, 55hp engine and one interior trim level which featured electric windows and apple green control stalks. Twingo was presented with four different body colour choices at its launch :
Outremer Blue Red Green Corail Coriandre and Indien Yellow.

Only two options could be specified: a folding canvas roof and climate control. Twingo featured a monobox architecture which permitted a better distribution of space between the engine compartment and cabin. The wheels were pushed right out to the four corners of the vehicle and there was just one wheel size and a single engine. These attributes enabled the interior space to be optimised. At the time of its launch, Twingo topped its class in the small city car segment in terms of height, width and knee room – most notably thanks to its innovative sliding rear seat. All four seats could in fact be folded flat to create an impromptu double bed – a unique offering in its field that immediately underscored Twingo’s smart design and versatility. 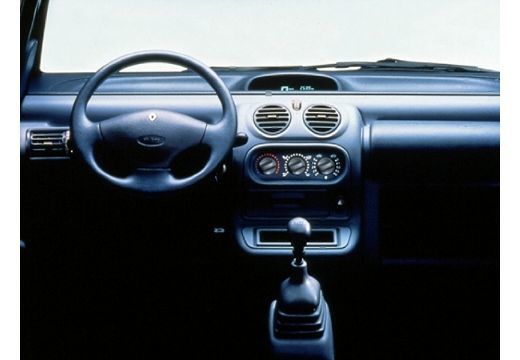 “It's up to you to invent a lifestyle that goes with Twingo!”

This advertising slogan accompanied the launch of Twingo, dubbed by some as the ‘Frog from Billancourt’. The moniker Twingo – a blend of ‘Twist’, ‘Swing’ and ‘Tango’ – was emblematic of the unusual, dynamic and aesthetically-pleasing design of this vehicle which exuded optimism and joie de vivre. Twingo saw Renault take a totally fresh stance on the automobile. The deliberate polar opposite of a status-enhancing vehicle, it inspired a new type of consumption: people bought a Twingo for themselves, not to impress others. People appropriated Twingo for their own desires and invented a lifestyle that went with it. 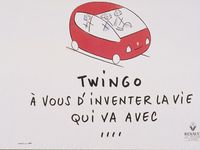 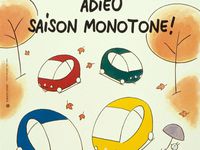 French advertising for the 1993 Renault Twingo

Twingo was not a downsized version of Renault Espace. It boasted its own distinct personality, with a curvy, rounded exterior design that expressed strength and beauty with an almost human face. The design of the dashboard guaranteed perfect visibility and married simplicity, functionality (with the centre console) and a touch of humour with its hazard warning lights switch shaped like a clown’s nose. 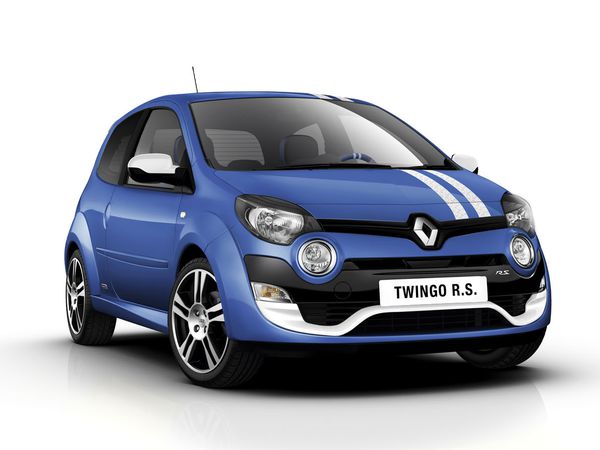 1994: A Frenchman covered 240,000km in a Twingo across the harsh Australian outback, demonstrating the reliability of this car whose talents were not restricted merely to city motoring. At the end of the journey, the car was painted by an Aboriginal artist.

1994: Launch of Twingo Easy equipped with a manual gearbox but no clutch pedal. 1996: Launch of the limited-edition Twingo ‘Benetton’ and Twingo’Matic versions, fitted with an
automatic three-speed gearbox. Moreover, the engine was boosted by 5hp to reach 60hp.

1998: First major restyling of Twingo with upgrades to the chassis, seats, dashboard, lights and front bumper. Introduction of the limited-edition ‘Elite’ version.

1999: Launch of the top-of-the-range ‘Initiale Paris’ version. 2000: Launch of the 16V, 75hp powerplant and Quickshift sequential gearbox. 2005: Appearance of the ‘Kiss Cool’ limited-edition.

June 28, 2007: Production of the last Twingo 1 in Europe following some 2,075,300 sales over a career that lasted 14 years – an exceptional lifespan by car industry standards.

2012: Twingo continued to be manufactured in Colombia until 2012. Between 1995 and 2012, Twingo achieved tremendous success in the Colombian market, notching up sales in excess of 100,000. Twingo Tatoo was Twingo 1’s final limited-edition version.

2013: The next genertion of Renault Twingo has been presented. The concept is inspired from the Renault LeCar ! 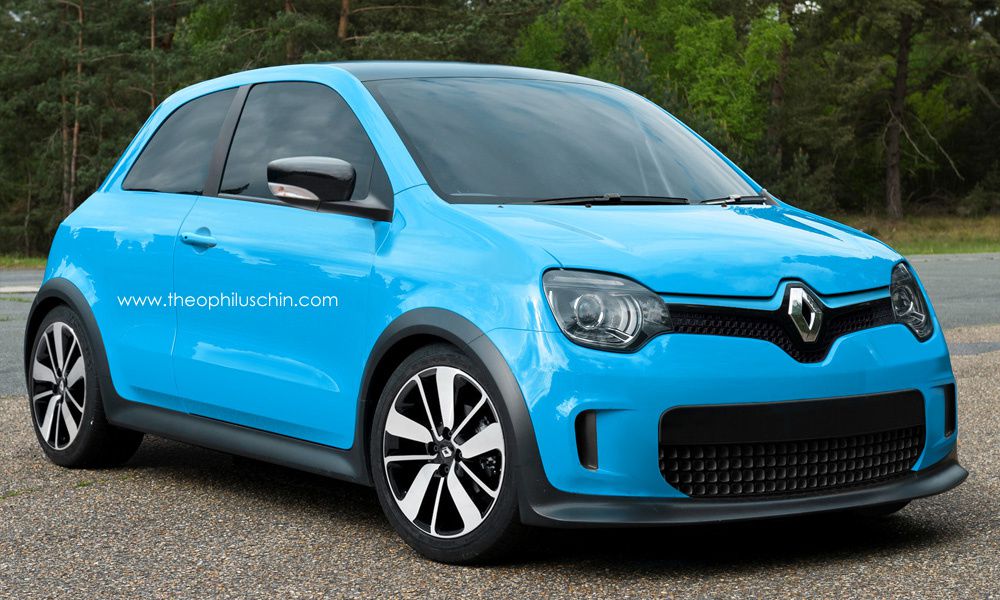 The next generation of Renault Twingo inpired from the Renault LeCar !