Citroën Racing presented details of its 2014 sporting programmes today at its technical centre in Versailles. For the first time ever, Citroën will be competing simultaneously in two FIA World Championships, with Rally Cars (WRC) and Touring Cars (WTCC). This commitment to motorsport is also reflected in the products of the Brand, which has today unveiled a limited edition DS3 Cabrio Racing.

From the kick-off of the WRC on 14 January at Monte-Carlo to the chequered flag at the final race of the WTCC on 16 November at Macao, Citroën Racing is about to experience 306 intense days of competition, with two World Championship and a total of 25 races!
“We are embarking on a challenge that is not just sporting, but also technical and logistical.

The entire team has been very enthusiastic and creative in preparing for the coming season as effectively as possible,” confirmed Yves Matton, Citroën Racing Team Principal. “We are very fortunate to be able to take on this double programme. Despite the difficult economic conditions facing the automotive industry, the trust placed in us by the senior management of PSA and the support of our partners have enabled us to implement our plans successfully. We are going to reach more countries, in all four corners of the planet, and we are going to have so many more opportunities to promote Citroën and showcase its Créative Technologie.”

“We are not starting from scratch in either championship. Our experience in rallying and the FIA’s desire for regulatory stability means we can approach the WRC side of things in a relatively relaxed frame of mind. We have opted for the crews Kris Meeke/Paul Nagle and Mads Østberg/Jonas Andersson to represent us in the Citroën Total Abu Dhabi World Rally Team. Our aim is to support their progress so that they are able to challenge for victory at certain events. Khalid Al Qassimi/Chris Patterson will also be competing in a few rounds of the WRC, but their main objective will be the Middle East Rally Championship.”

“The challenge awaiting us in the WTCC is also very motivating, but we need to learn about everything in this discipline. We feel that we have worked well on the Citroën C-Elysée WTCC, even though we have no real basis for comparison given that the regulations are new for all of the competitors. Yvan Muller’s assessment, who believes the car has been well designed, has reassured us in terms of the direction we have taken. We can’t wait to go up against our rivals on track to get confirmation! Alongside Yvan and Sébastien Loeb, we are delighted to confirm our third driver, José-Maria López.” 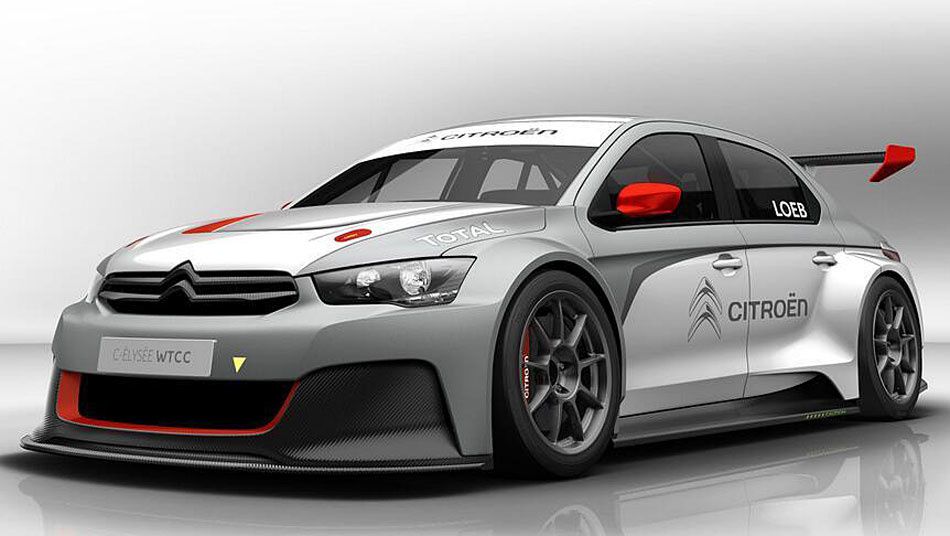 Day by day, week by week, the clock counts down for Citroën Racing to the opening round of the World Touring Car Championship, scheduled to start on 5-6 April 2014 in Marrakech.

The team has come a long way since it officially announced it would be taking part in the championship earlier this year, on 19 July! Once the CAD drawings had taken on physical form, Citroën C-Elysée WTCC completed its first on-track tests. Since then, the car has undergone a series of development sessions, with the twin objective of obtaining a quick and reliable car.

Central to the project since its inception, Sébastien Loeb was the first driver to be confirmed on the team. This is unquestionably the greatest challenge that the 39 year-old nine-time World Rally Champion has taken on in his career. With the modesty befitting of a beginner, he has started from scratch in his attempt to learn about the inner workings of a racing category that is fundamentally different to the one in which he has excelled! To achieve his goal, the Alsatian driver has taken part in a variety of track racing events, notably winning several races in GT.

In securing the services of Yvan Muller, Sébastien Loeb’s teacher and rival, Citroën Racing has played a trump card for this new adventure. After starting out in single-seater racing and proving unbeatable in ice racing, “the other Alsatian” is above all one of the most experienced touring car drivers in the world, having competed in twenty seasons! In winning his fourth world title in 2013, Yvan became the most successful driver in the history of the WTCC. And he almost certainly isn’t done yet!

Alongside the two Frenchman, José-Maria López will be the third driver to compete for Citroën Racing. Having come close to a drive in Formula 1 after an impressive career in single-seater racing, the Argentina quickly adapted to GT and touring car racing. Competing in the very popular TC2000, “Pechito” won the Argentinean national championship in 2008, 2009 and 2012 (Súper TC). His experience of the WTCC is limited to the meeting held on the Termas de Rio Hondo racetrack in 2013. However, he made quite an impression, producing a stunning performance to win the second race!

Yves Matton, Citroën Racing Team Principal: “After spending the last ten years or so at the top of the WRC, we are excited about the idea of writing a new chapter in our shared history with Sébastien Loeb. We chose the WTCC because it is a form of racing with controlled costs, a genuinely-worldwide race calendar and a lot of media coverage. As was the case in cross country/rally-raid and in WRC, we have attempted to secure the best drivers for our team. Yvan Muller has been heavily involved in development of the car, and has been one the driving forces behind the progress we have made. But we also have high expectations of José-Maria López, who has proven to be very comfortable at the wheel of the C-Elysée WTCC during his first tests...” 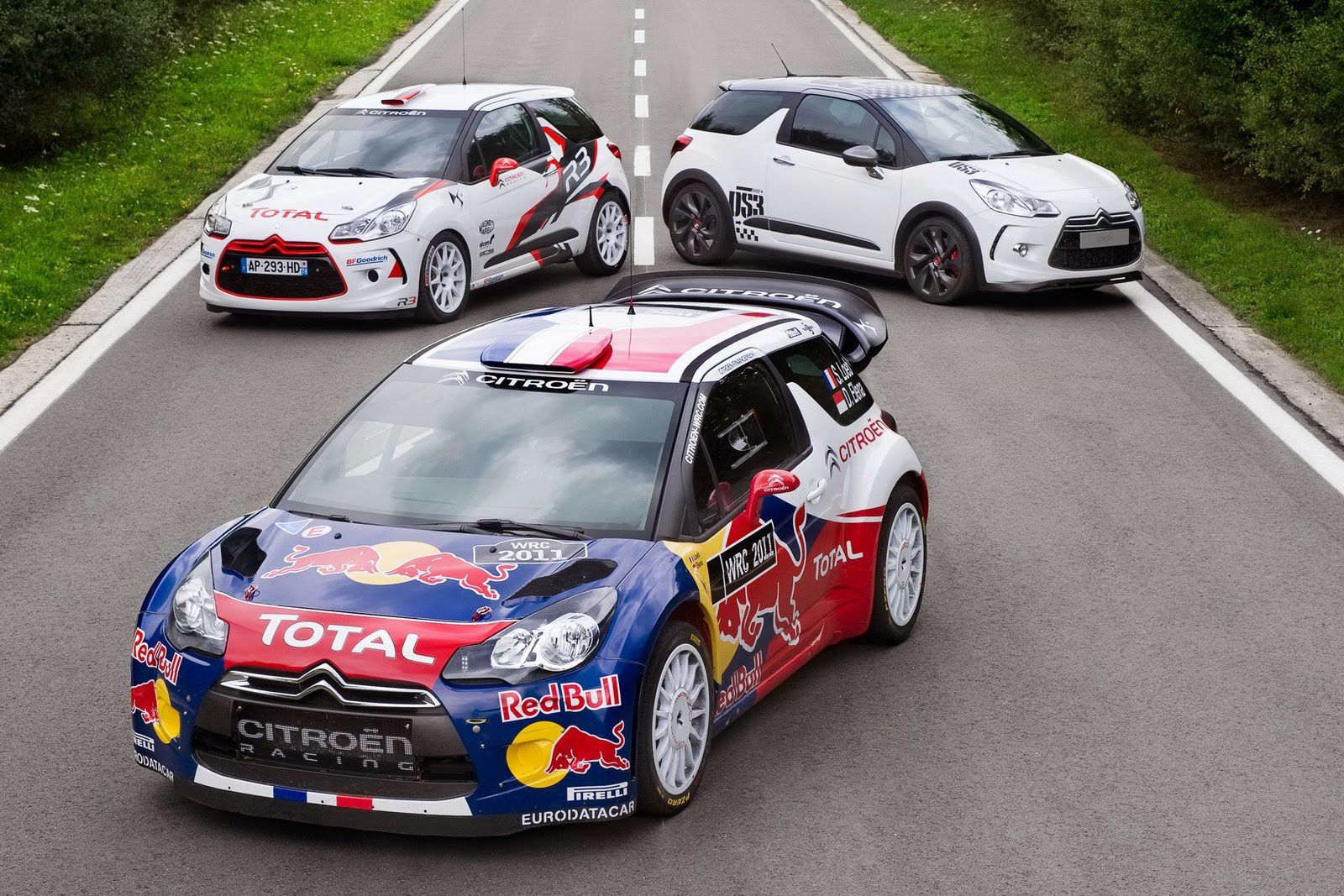 With 93 wins and eight Manufacturers’ World Championship titles, Citroën Racing has the best competitive record among the teams currently competing in the WRC. This impressive heritage continues with Citroën Total Abu Dhabi World Rally Team’s entry in the championship in 2014.

First seen in 2011, when the new regulations were introduced, the Citroën DS3 WRC will be contesting its fourth racing season. After winning three rallies this year in Monte-Carlo, Argentina and Germany, the DS3 WRC remains very quick on all road surfaces, even when up against more recent models.

The big changes for 2014 concern the teams nominated to score points towards the Manufacturers’ World Championship standings. Having competed in a DS3 WRC on two occasions last year, Kris Meeke prepares to tackle his first full season in the World Championship. The 34 year-old Northern Irishman has been part of the Citroën Racing family for a long time, since he competed in the 2005 and 2006 J-WRC in a C2 Super 1600. IRC Champion in 2009, Kris has only taken part in around ten rounds of the WRC in World Rally Cars, but he is extremely motivated to make the most of this opportunity.

A WRC regular since he was 19, Mads Østberg is actually more experienced than his new team-mate. The 26 year-old Norwegian has already competed in 65 rallies, including six podium-finishes and one win (Portugal 2012). For his fourth full season, Mads has opted to challenge himself by joining a team that in the past he has often tried to beat! A naturally aggressive driver, Mads Østberg is counting on combining his turn of speed with Citroën Racing’s expertise as he goes in search of that winning feeling again.

Competing predominantly in the Middle East Rally Championship in a Citroën DS3 RRC, Khalid Al Qassimi will also be taking part in a selection of WRC events. The Abu Dhabi driver will line up in Sweden, Portugal, Italy and Spain.

Yves Matton, Citroën Racing Team Principal: “Thanks to the support of our partners, especially Total and Abu Dhabi Racing, we are pleased to be able to continue Citroën Racing’s involvement in WRC. The team has the expertise and experience that will help our crews to establish themselves among the leading drivers in the Championship. Kris and Mads both have quite a bit to learn, in different areas. Our aim is to help them reach a level where they will be able to make a real impact and win rallies.” 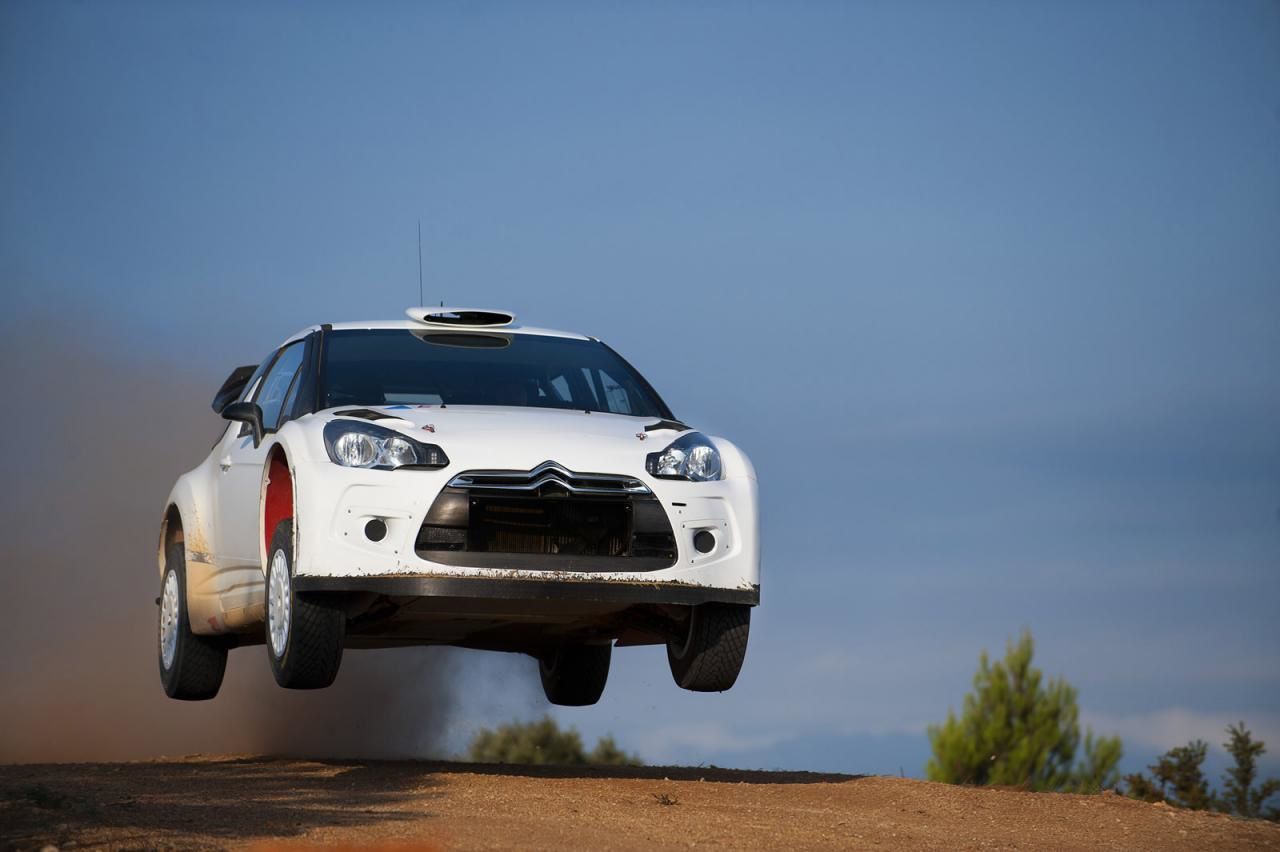 At the next level up, the Citroën Top Driver series runs at six rounds of the WRC3. In their DS3 R3s, the best talented young drivers attempt to win the chance to compete in the WRC2 in a Citroën DS3 R5 the following season. 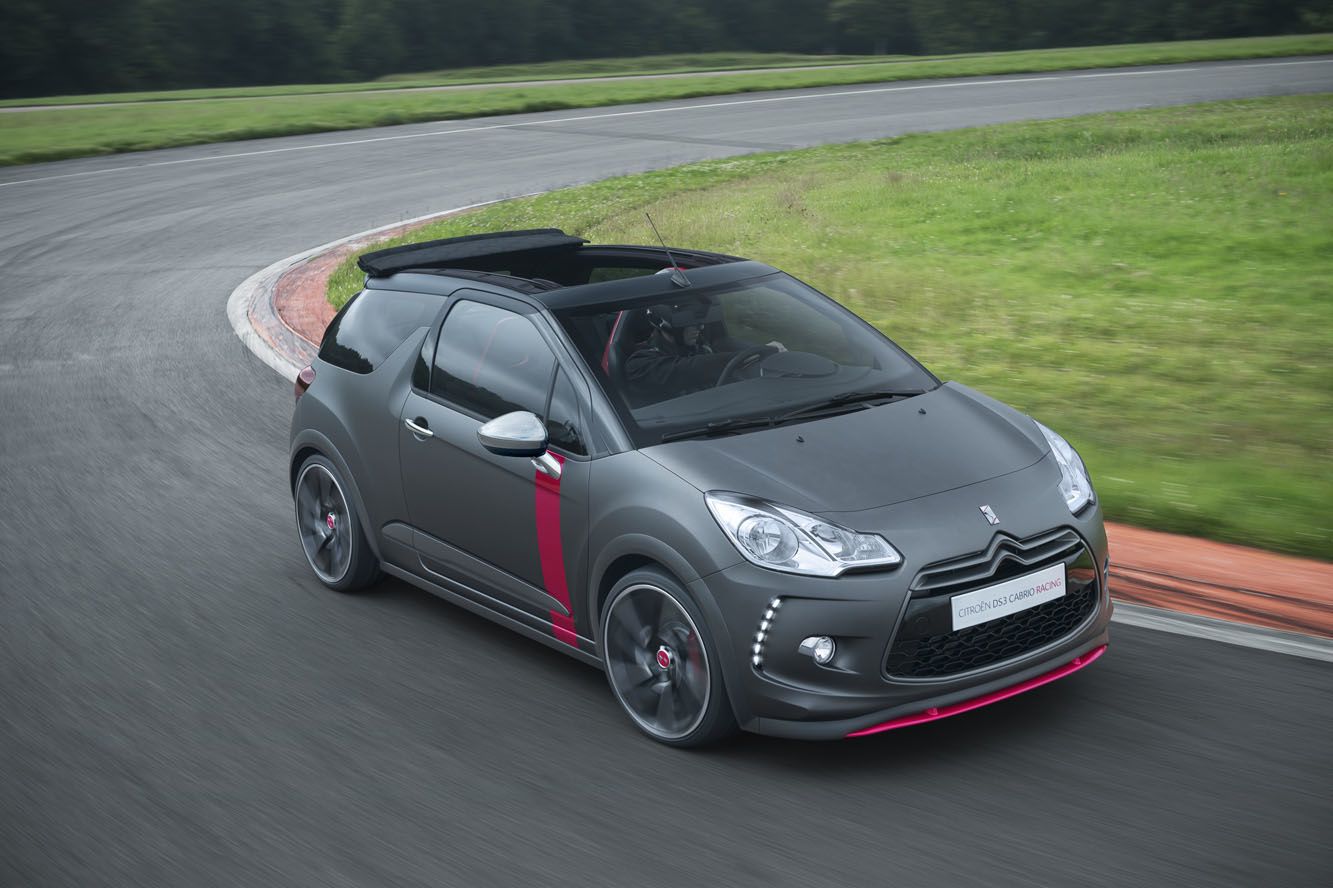 Citroën’s commitment to motorsport is also reflected in its products, like the individually numbered, limited edition Citroën DS3 Cabrio Racing unveiled today. Directly inspired by the concept car presented at this year’s Goodwood Festival of Speed and Frankfurt Motor Show, it combines all the qualities of the Citroën DS3 Racing with the pleasure of open-top driving provided by the DS3 Cabrio. A coherent combination, as the Citroën DS3 Cabrio has adopted a streamlined architecture (only 25kg heavier than the hatchback version), which means the car boasts responsive, agile handling.

The cabin also been given a very specific treatment. For example, the exclusive, matt-finish Moondust Grey bodywork colour is also used on the upper dash and on many interior trim items such as the central console of the instrument panel. The steering wheel inserts and the fascia panel cap are finished with a carbon fibre effect. Lastly, the dashboard also features the Crimson Red colour used on the vertical strip on the door interiors. The exclusive nature of the Citroën DS3 Cabrio Racing is clearly displayed with the Citroën Racing signature on the headrest of the front seats and a numbered identification plated located on the base of the gearshift lever.

Performance lies at the core of the Citroën DS3 Cabrio Racing. Its 207bhp, 1.6-litre engine, developed by Citroën Racing, benefits from the expertise of the eight-time World Rally Championship-winning team. 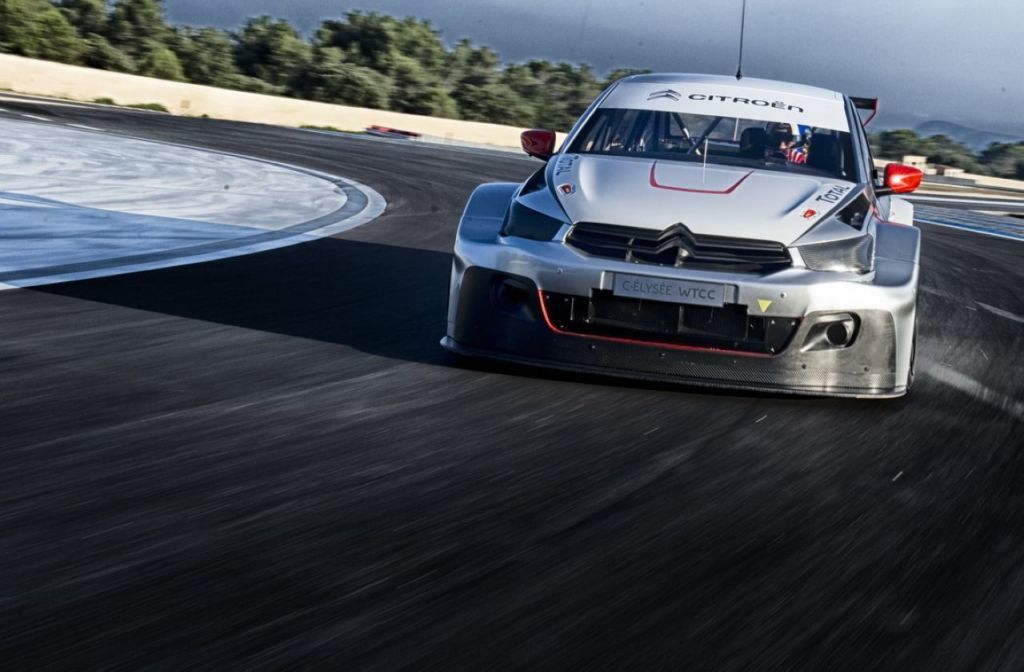